Of course, an apologia for any great literary rogue should begin with a quote from Lord Byron. And this one does.

“The Darcys of this world can afford to have morals…”

Has it really been two-and-a-half decades since the immortal BBC Andrew Davies adaptation of Pride and Prejudice, with the wet-shirtsleeved Colin Firth almost single-handedly starting a Jane Austen craze? (I exaggerate a bit—though not much—as something was definitely in the water–besides Mr Darcy–in the mid-‘90s, and Pride was contemporaneous with Emma Thompson’s brilliant adaptation of Sense and Sensibility.)

Just as there is, for me, only one definitive adaptation of Pride and Prejudice, it’s difficult to see the antagonist played by anyone other than Adrian Lukis. Though charming, especially before we know the story through Darcy’s eyes, Wickham becomes increasingly a figure of distaste…but he is George Wickham. Yet, swept up as we were in the sizzling tension between Darcy and Lizzy, it’s easy to overlook or underestimate the skill it takes to hold the screen as the rival. (A coworker of mine–not an avid reader of Austen–recalled reading Pride and Prejudice and seeing the miniseries at school. He was still–years later–in such a fit of anger about Wickham that I think he’d have called him out to a duel then and there if Wickham had been around…that’s some skill!)

Now Wickham has his moment to give us another perspective, decades after his elopement with Lydia. The one-man show is staged in the Theatre Royal, Bury St Edmunds and was streamed live by the Original Theatre Company. Cowritten by Lukis and Catherine Curzon, Being Mr Wickham has a simple concept: on the occasion of his sixtieth birthday, a famous rogue reminisces about his life and gets to tell his side of the story. And it’s filled with wit and intelligence and humor, from seductions (“one thing led to another, as these things invariably do…”) to dodging the life of a curate, to action on the Battle of Waterloo. Asides about Lord Wellington and, of course, Lord Byron. His imitations of Darcy are great fun; his description of being with the Bingleys described as “forever supping on sugar and cream”; his dismissing the idea that his own children–so unlike himself–might be another man’s by arguing that “they’re both so good-looking”; his aversion to men “so desperate to be respectable they forget the importance of being interesting.” Mostly, we’re held captive by Lukis himself. He draws us in—I was almost going to say, the way Iago makes us co-conspirators, but really, Mr Wickham isn’t that bad, by a long shot. (Or am I just softening to him a bit…?)

“A man who cracks under pressure is no good, in battle or in life.”

I watched this on my phone, holding my sleeping two-month-old niece, so I encountered the challenge of having to repeatedly suppress laughter so as not to disturb her. Adrian Lukis has great comic timing and expression, and the script is witty and well-paced. (On the phone, however, the auto-generated captions were on, and I couldn’t figure out how to turn the darn things off, so I had additional laughter to suppress in seeing his allusion to Scylla and Charybdis turned into “caribou this”—or more appropriately, the mention of a “bawdy house” turned into “booty house.”)

It was a delightful way to spend an hour. (SPOILER AHEAD) As one who—much as I love stories about murder and drama and tension—can’t really resist a rogue or a bromance, I couldn’t help but interiorly cheer to think that Darcy had succumbed to Wickham’s ridiculous charm at last and renewed the friendship after each couple had had children of their own. (Thus begins a new generation, with the promise of new tensions and scrapes along the lines of the old Darcy/Wickham story.) And, as Wickham himself suggests, where would our stories be, without the rogue?

Would Austen herself had gone so easy on Wickham, years later? I’m not sure. But I doubt whether she’d have complete success in resisting Lukis’ charm for long. 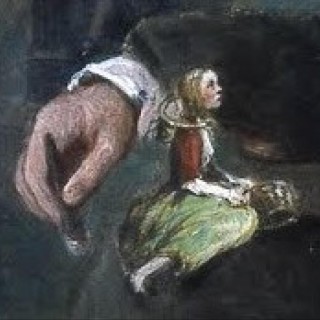 If each person’s world were a vast and intricate “House,” mine would probably be filled with many Random Rooms: for fabric art, for opera, for books (especially the Inimitable), a green Room for the Twelve fascinating frights who ruled France in 1793-94, cozy Hobbit-sized Rooms, vast halls for Jedis and Mandalorians and redemption-worthy scoundrels. The House would have a Bleeding Heart Yard and a courtyard of flowers and herbs and wild birds and ineffably mysterious blue roses. I would adopt Susanna Clarke’s flag of the Raven in flight as its banner. (I hope she one day publishes Thomas Lanchester's Treatise Concerning the Language of Birds.) I’d finish revising my novel (represented by Green Light Literary Agency) in a room overlooking the Sea, naturally. And naturally, a Woman in White would haunt the East Wing of the House, as in any respectably Gothic habitation. But I would spend most of my time in the Dickens Room. But then again, I find him in every Room, haunting the House pleasantly. After all, Dickens is a way of life.

#advent reading 💙 and to those who celebrate Advent/Christmas, or who just enjoy this time of year, Happy first Sunday of Advent! To my Jewish friends, Chag Sameach, Happy Hanukkah this eve!
“A bosom friend—an intimate friend, you know—a really kindred spirit to whom I can confide my inmost soul. I’ve dreamed of meeting her all my life. I never really supposed I would, but so many of my loveliest dreams have come true all at once that perhaps this one will, too. Do you think it’s possible?”
“‘In the hour of my death, I shall hold sacred the one good remembrance— and shall thank and bless you for it—that my last avowal of myself was made to you, and that my name, and faults, and miseries were gently carried in your heart. May it otherwise be light and happy!’
"O God, light a candle in my heart
little beauties from the day, and more for the #tbr pile. And the view from the walk & a gorgeous floral delivery from our friend Frank ❤️
Random project prep for December...